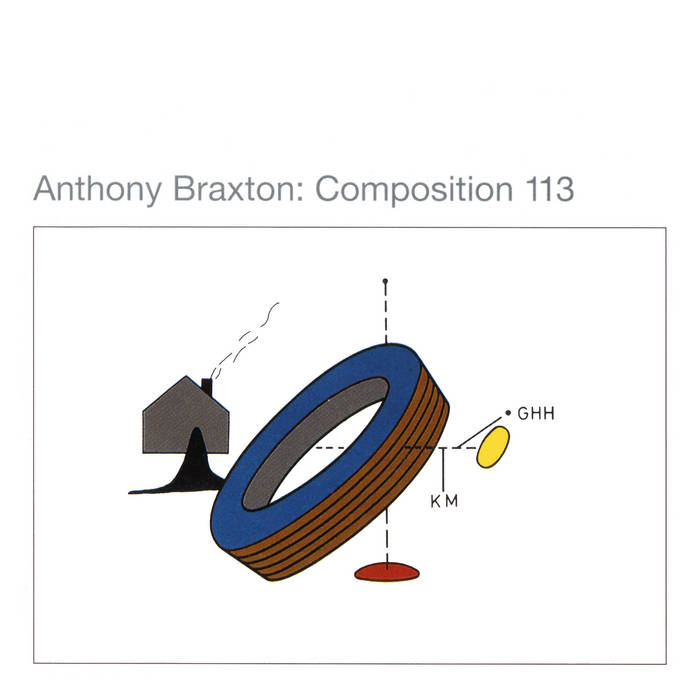 It is midnight and raining at a small train station in Northern Africa and finally the old locomotive has arrived. As the smoke begins to clear from around the tracks of the engine, we can see six people boarding the train - all of whom are clothed in bulky robe-like garments with long black hoods (but our vision is obscured because everything is taking place in the shadows - so we can not see their faces). When the doors of cabin twelve are opened and the six blurred figures enter into the coach it is from the Ojuwain (-the believer-) must make his decision.

This is a solo environment context that seeks to provide a visual an image platform for extended improvisation. The work is constructed as a character improvisation that establishes six different levels of dialogue for the instrumentalist and listener to experience. In Composition 113 we are allowed to sit in on a battle for the hearts and minds of the next generation - in an effort to win the loyalty of Ojuwain (and his already captured brother, David*).

Imagine - here is Ojuwain in the center of a space with six shadow figures positioned all around him (each of whom would like to convince him to hear a different version of the truth). The challenge of this context is to follow the vibrational presence related to each storyteller’s tendencies as all six characters move in and out different points in the dialogue (with new terms and stories).

Composition 113 is an experience of six material and conceptual characters that weaves into the space of the music. Each component in this context corresponds to an 11 note pattern whose root is in conjunction with the six characters on the train (-who are in fact really six sound attitudes and purposes). A given performance of this work involves establishing a sound state that develops six different structural blocks of material from six different primary attitudes - as a basis for creative improvisation.

Composition 113 seeks to establish a multiple context for creative exploration that allows for fresh options and sound strategies. In this work, each shadowed character is given space to plead his case to Ojuwain and it is for this reason that the work is divided into six conceptual emphasis. But for the character Ojuwain the challenge is to recognize each travellers patter signature inside of the complete statement - because every explanation is punctured with several interruptions from the other characters and there are moments where it is not always possible to discern which character was talking. To make matters even worse the cabin lights on the train are constantly going off and on (and so the conversations are really taking place in the dark on a cold and damp journey in what seems to be a fantasy landscape setting.)

Composition 113 is an imaginary context for extended improvisation that seeks to establish a vibrational and operational basis for creative participation. The work is composed as a discipline to enter into the consciousness of given sound materials (and variables) - as a means to gain entry into a transformation relationship with creativity and story telling. The six patterns that make up the material focus of the work were conceived as emotional and vibrational materials that give insight into the personalities of the six major character of the music. To really experience this forum is to have some understanding of what given figure proposes to the focus of its improvisation - with respect to its own material nature and tendencies as well as how those factors are utilized in the composite music. This is so because each character is conceived as a different mood and different pulse.

Composition 113 gives the creative instrumentalist a fresh set of variables to consider in the ever expanding challenge of creative exploration. This is a living dialogue structure that establishes terms for creative exploration and focus. The work takes place as an unfolding of events on that night Ojuwain happened to take the train. Here is a music forum that relies on a cross sectional use of its material components as a basis for each character to spin his own version of reality.

Composition 113 is a mind set context for the creative instrumentalist and listener that serves as a basis for sound exploration decisions (and focuses).

The six characters that make up the primary vibrational nature of Composition 113 are conceived as, points of influence' that determine the creative alignment of the music (as it unfolds in the moment) - with respect to its mixture of improvisation and fixed notated materials. Character emphasis in this context is approached as a relative concept that allows the instrumentalist to form his or her own character and character devices within the broader context of given preset vibrational traits and tendencies. What this means is that each interpreter can establish images and emphasis based on his/her own relationship and perception of given universal traits as opposed to having an alien definition or variable assigned to a nonflexible structure or vibrational operative that goes against the perceptions and grain of the instrumentalist - (who is expected to create the music). This is a character study context that first starts from each individual's own relationship to him-or herself.

The six principal character tendencies of Composition 113 are:

A given interpretation of the work asks the instrumentalist to come to terms with six principle interpretation personalities (and strategies) as a basis for invention dynamics and diversity. I conceived the work as a forum that requires learning six different roles (or character perspectives) that can be actualized into the space of the music as needed. The experience of this forum has helped me to think more and more about the musician as and painter - and weaver of stories.

Composition 113 is theatre piece for one single instrumentalist, one large photograph and one stage prop. This is a situation improvisation that attempts to provide a unique forum for creative invention and participation. A given interpretation of the work a visual and musical experience that gives fresh insight into the experience of solo performance. The soloist is cast as a master of many disguises who shifts from one character to the next - in the moment to moment unfolding of the music. The work can be performed in either six different sections that contain brief separations between each major character emphasis or in one extended section that contains no breaks in the perceived continuity of the total music. All of these matters are given to the instrumentalist to decide - depending on the needs of the moment.

Composition 113 is an opportunity to enter into the states of the music and become acquainted with the motive and vibrational nature of sound materials. This is a discipline context that challenges the creative improvisor to react in fresh ways to the moment. The instrumentalist in Composition 113 is asked to assume the task of interpreting six different material sections through six different mythological characters and phrase construction attitudes as a basis for participation and creative exploration. The challenge of this objective has come to interest me on many different levels - because the future promises to extend the total concept of the performing artist and creative involvement. Here is music of six components and six characters that all play in every section (in different orders and tempos) and with different character emphasis. To experience this phenomenon is to enter a music of kaleidoscopic tendencies that change from one state to the next.

The work was conceived as a flexible material structure that can be integrated into extended improvisation and used as needed (with unlimited repeats and/or material extractions). I composed this structure on 12-83 on the 2:16 train from Karlsruhe to Stuttgart, West Germany, as a German idea that could be quickly realized and executed, in fact the material that comprises this version was constructed in about twenty minutes. The completed score will be finished before the end of 1984 and will contain added material extensions for each of the six primary sections of the music.

The piece must be performed with one large photograph of a dark train station at midnight - positioned to left of the instrumentalist (and raised to around eight feet from the stage) and the photograph must be of a rainy and somewhat gloomy image - that gives one the impression of secrecy and desperation, (the exact dimensions and specifications are in the score). To the right of the instrumentalist a long pole like stand should be positioned that contains a lighted railroad lantern. A given performance of Composition 113 should include the use of four to six microphones that give the instrumentalist sound direction and focus possibilities. To achieve this effect on the recording I requested the use of four directional microphones.

The fantasy of Ojuwain represents an opportunity to move into the world of portrayal and intentions - as an effort to connect to the greater challenge of extended involvement. All of these matters are directly related to the route of my own creative growth (and attractions).

Composition 113 is dedicated to Pedro, Margit and Caetano de Freitas - in celebration of the forming of their own recording company. There is certainly a need for alternative companies that are interested in creative music.

*The character Ojuwain and David (-the visionary-) are part of a series of characters that I am developing for future use in my ritual and ceremonial music and stories. This will be in conjunction with the forward spread of tri-axium information dynamics and assumptions - as an individual effort to establish motives for world change. It is my hope to move into the world of drama and imaginary.

(for one soloist, a large photograph, and prepared stage)

MF DOOM is given his flowers, plus appearances from MC Jada Imani and Stanley Ipkuss